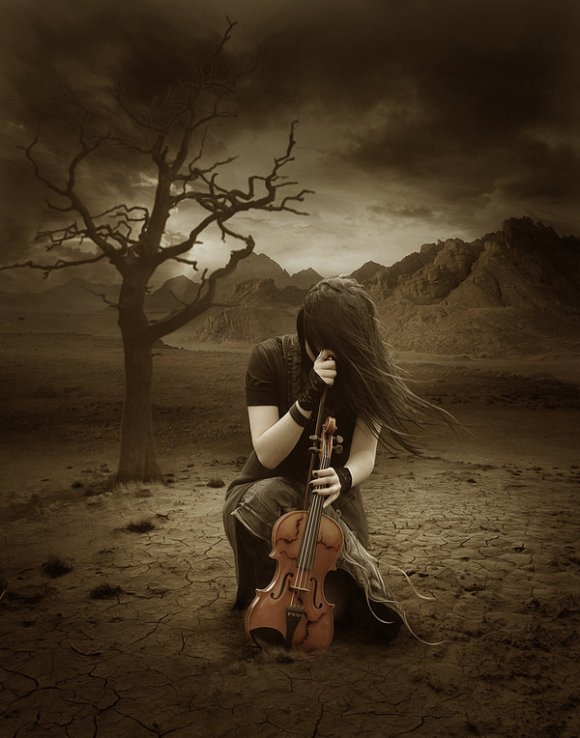 YUKI WAS A YOUNG WOMAN who played the violin at street corners in the great city of glass and steel.

She was very poor; she depended on the coins that people dropped at her feet to buy food. Her family had told her to find a job in the great city, but Yuki loved play the violin more than anything else. She would practice for long hours, then find a quiet spot near a the yawning black arch of a subway terminal and entice the violin to sing for the people who hurried by, people who didn’t look at Yuki as she swayed in the arms of the music, her eyes closed, her lips parted. The sweep of her arm was a blur, the bow slashed and jabbed the air. The music rushed and rushed. And in Yuki’s mind, amid the haunting echoes of the violin, there were times Yuki thought she could see the music. She reached out to the music, tried to touch it, hold it. The music would smile at her. Sometimes the music was shaped like a man, sometimes a river. Glowing, shimmering, changing, the music would smile at her and whisper, “More.”

Yuki would open her eyes and slowly lower her beloved violin, her body aching and drenched with sweat. She would kneel to collect the coins at her feet. It was never very much. She would go to the small room she rented and she would sleep, and in her dreams her violin was her lover, and it was his turn to hold her and caress her and entice her to sing.

Yuki was heavily in debt. She had not paid the rent for her room for a very long time, and she had many bills to pay. When she went to her family, they called her irresponsible and refused to help her. This was living in the real world, they told her. “Time to grow up.”

Then one day (a Wednesday), Yuki came back to her room after playing the violin at a street corner for many hours, she found the electricity and the hot water had been shut off.

Finally Yuki realized she could do nothing else: she had to sell the violin in order to pay the rent and the bills.

She went to the music shop, the violin at her side.

It was an outstandingly crafted instrument, an antique, very rare. Yuki was paid a goodly sum for it.

But Yuki crumpled the paper money in her hands as she watched the shop owner pack the violin away; she swore in her heart to her lover that they would be together again someday. And Yuki fled the music shop in tears.

Not too long after that, Yuki found a job with a very large business agency, and it was not nearly as dreadful as she had imagined. She grew proficient at her duties, she met many new friends, she was able to pay her bills, and soon she moved to a better, nicer room. When she saved enough money, she went back to the music shop to buy back her violin.

But it had already been sold, the shop owner informed her, sold to a woman who wanted her little boy to learn the violin.

Yuki had feared this, but the realization of this fear wasn’t as shattering as she had expected. She went home to her nice new apartment, watched a movie that had at one time been rare and precious but could now be watched whenever she wished, then went to bed. She had to get up early the next day for work.

Time passed, and Yuki was promoted where she worked and given new responsibilities, and thoughts of her lost violin grew faint and finally faded away. She found a new lover to share her bed, and while he was incapable of enticing her to sing, he was able to make her scream.

Then one night when Yuki was walking home with some friends from work, she heard a soft melodic voice call her name from the shadows of a subway terminal. She looked, and saw a short, slim man, his skin the color of stained wood.

Yuki blinked. She felt the caress of a forgotten dream on her cheek.

Then the laughter of her friends pulled her back, and she turned with them, she continued on her way home. But there was a troubled frown upon her face.

A few nights later as she slept alone in her bed, Yuki was awakened by a soft rhythmic tapping at her door. She rose from her bed and opened the door.

It was the man she had seen in the street, the one who had called her name.

“Yuki,” he said, his voice melodic, so soft, so familiar. He stepped in and took her hand. “I’ve been trying to find you for so long.” His eyes were the color of broken dreams.

Yuki stepped away. “Who are you?”

“Have you forgotten me so completely? I am your violin, your lost music, your lover. You gave me life. Without you I am nothing. I’ve sought you so we can be together again.”

And Yuki knew that it was true, that he was indeed her old lover, her lost music.

She turned away, unable to face him.

“The son of the woman who bought me hates music, Yuki. He especially hates violins. All I do is gather dust under the brat’s bed. Last week he tried to trade me to his friend for a stack of comic books. Can you imagine? Me, a Stradivarius!”

He tried to smile, but Yuki wouldn’t look at him.

“Make me sing again,” he pleaded.

Yuki shook her head. “I can’t,” she whispered.

The Lost Music looked at Yuki closely, saw how her face had changed, how the light no longer burned in her eyes. He sighed.

“Then I am lost,” he said. “But I wish to give you something before I quit this world of silence, I will make you sing, my love.”

And he took Yuki in his arms and held her and caressed her, a bow stretching across taut strings in a humming purr, a vibration, an echo and an ache, and as his tears fell Yuki became his art and his instrument, and a song ripped free from her, rising and falling in the dark. She sang, and then she was alone in her room with her sorrow and loss, and she sang no more.

When she went to work the next day, she saw the broken pieces of a violin in the trash outside her house.

Awawah! Hey now! That means a lot. THANK YOU!

Music to my eyes.

Thanks! I need to talk to you, man! Serious MOTHRA-mythos brain pick session!

I think Oscar Wilde would have liked that. I certainly did.

TOO kind, Mighty Matthew. But thank you.

Hi Drax,
I’m going to read this again, I’m sure. The whole concept is beautifully expressed, with many fine touches, and wonderful lines and passages. The conclusion is a double tragedy. The photograph you chose to illustrate your story is perfect. Thanks for sharing this! ~ Annie

Check my sidebar for a link to this story!

Thanks, Annie! How very cool of you!

Beautifully written and very original. I love your imagination.

“His eyes were the color of broken dreams” Love it.

Reblogged this on ICHIBAN WEAPON READY.