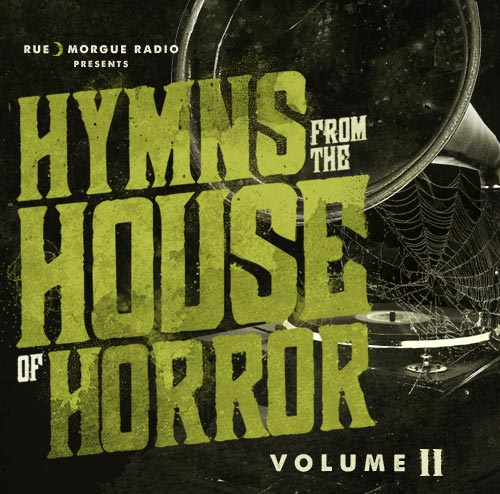 “Last year’s free, downloadable compilation album was so much fun to stitch together that we decided to try our monstrous hand at it again! Behold: Rue Morgue Radio’s Hymns From the House of Horror II! It has a nice ring to it, doesn’t it? Over the past year, a number of bands have caught our attention, so we asked some of ’em to lend us a song that we could pass along in the hopes that their macabre melodies will incite the same kind of incurable madness in you as they have in us. We received exclusive tracks, previously unreleased oddities, sneak peeks and killer cuts that, once mashed together with some fake grindhouse trailers (courtesy of RM staff and friends), makes for one hell of a horror set.”

“To download your copy, simply click HERE to receive the packaged ZIP file, complete with printable artwork, and hosted by Rue Morgue Radio’s eerie emcee, Tomb Dragomir. Then get the lowdown on all the bands and read what they have to say about the track they’ve contributed in the May issue of RM#111. Just don’t drag your feet! Hymns II will only be available until July 31, 2011. After that, it’s gone forever!”