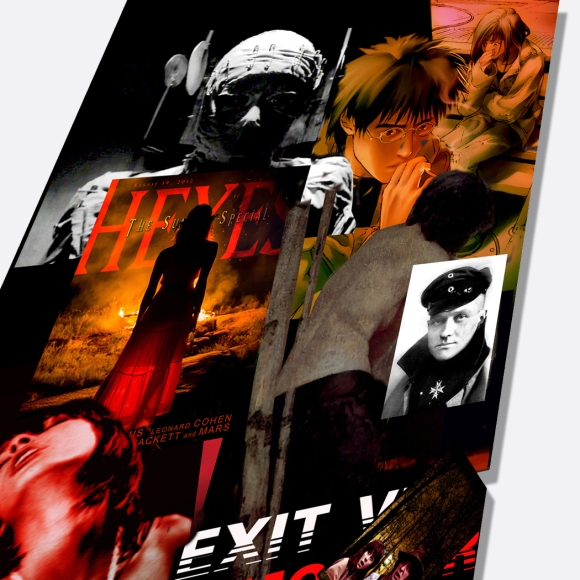 On September 1st, I wrote:

This site will be going on hiatus very soon, sometime during the week of Sept 3 — 7. I can’t say how long I’ll be offline. Last time it was nearly two months (Feb & March of this year in order to finish and publish the DESCENT eBook; prior to that, FOUR MONTHS last year to write a 19 page DOCTOR WHO book outline, mah gawd.) The need for a site shutdown always seems to arrive just as I’m in a good groove of regular posting and the daily number of site-visits are climbing; common sense (and vanity) would suggest that I not slow or stop, but rather, increase the site’s momentum. Yet despite overwhelming evidence which I have supplied and reinforced in head-hurting quantities in these very pages, I really am a writer first and blogger a distant, lower ranking. Yes, I have a blast posting pretty pictures, but the sigils are on the floor and the signs are in the sky: it is time to shutter this joint, time to go away and make something new, make something as fast and as best as I can, and then the crazy train will roll again. The science fiction writer M John Harrison said something on twitter the other day that really shook me up in a good way, he said, “Eat the fiction before it takes its chance & eats you. This is one of the meanings of Saturn eating his children.” I am always eaten by the freaky fuckwad babies I give birth to. This will be a conscious effort and experiment to eat the fictions and the fuckwads first.

On October 4, that still sounds about right.

I AM LEAVING, NOW. I sincerely hope to be back sooner than the new year. Be well, readers and friends. I will miss posting shit on this site on a regular basis. But I have much to do. Wish me luck, send me strength,  [Had to edit. Freaked out a bud.] SEND COOKIES TO MY HOUSE. [There.]

“Rod, You Holding Anyone Good, Man?”

The Avengers, a movie

THE BEAST a three panel comic

The Bride and Mothra

Giving the HEX to HITLER (I Love This Shit)

Why Can’t the Hero Be a Girl?

The Last Star in the Sky